A lot has happened since the last time we had a survey. We had the largest outage Salesforce has ever experienced, Permaggedon.

There was an official SFXD meetup at TDX 2019 where over 25 members hung out and got dinner/drinks. 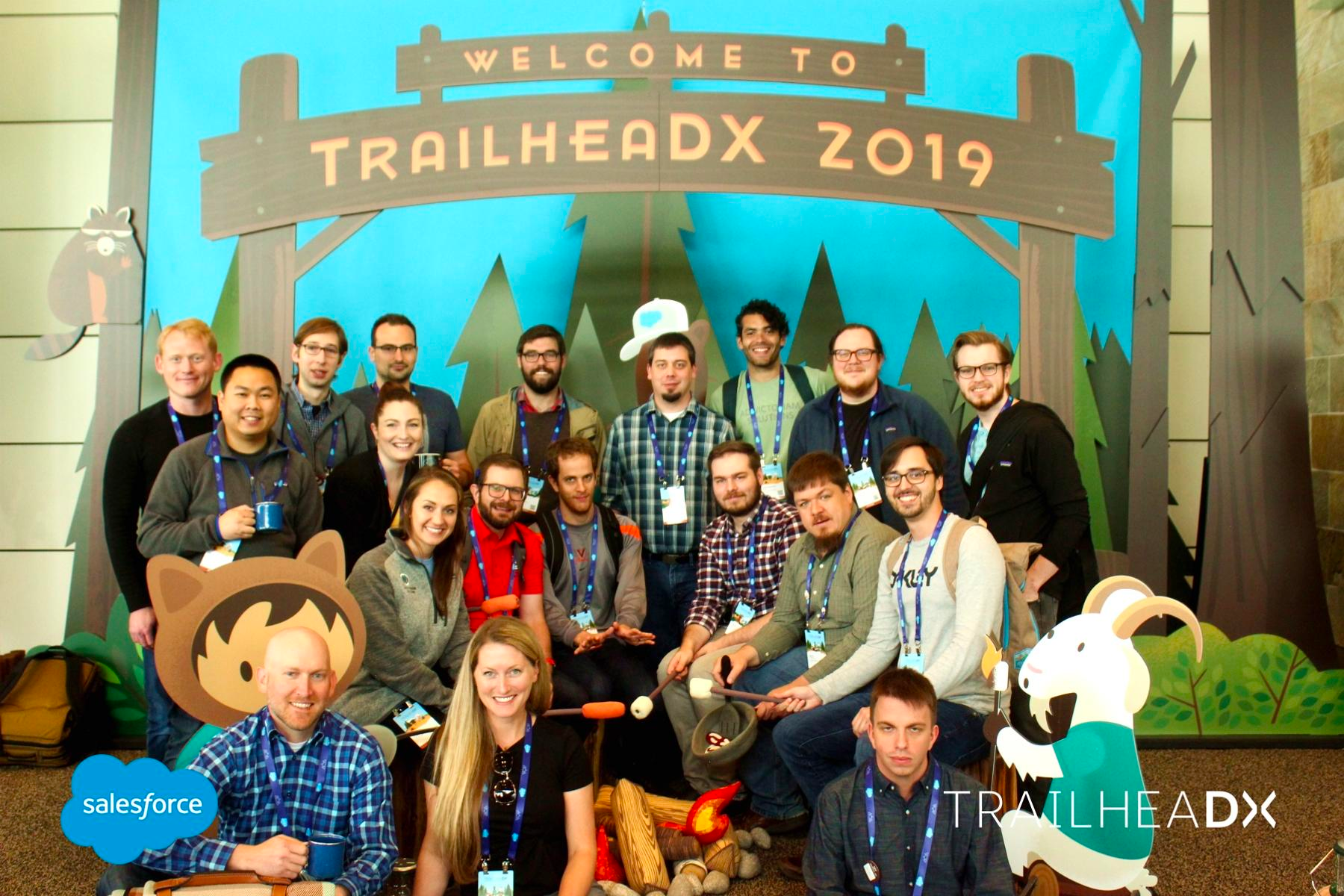 We created our official website/wiki: https://wiki.sfxd.org. I said after the last survey we grew 3 times since the previous one. We have again grown membership by 3 times since the beginning of 2019. With over 1,900 active members sending an average 3,000 messages a workday, we're now easily the most active, non-official Salesforce community around. We would like to thank everyone that has joined our community and hung around to make us what we are today!

If you are not a member of our community, join us by clicking here: https://join.sfxd.org

Before you ask, yes... I dumped the data into Einstein Analytics for this. It's prettier!

There were 272 responses but not everyone answered every question so you'll see slight discrepancies in the total responses.

Now lets get to the SF Exchange Discord User Survey 2020!

Up almost 5% from the year before, Females are now 13% of the membership. 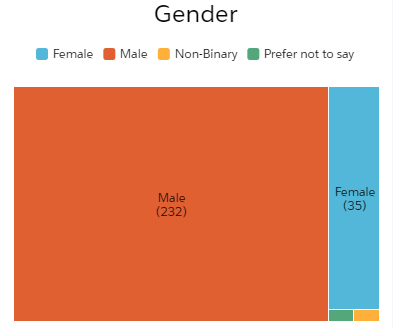 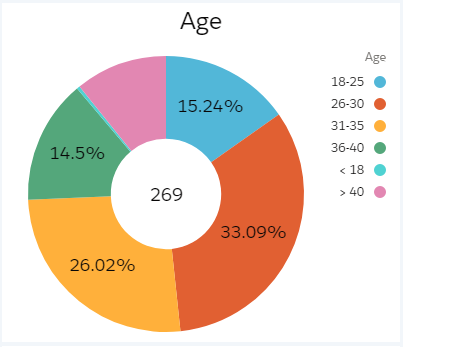 Unsurprisingly, United States is the big one here but look at how many other countries are being represented. We're certifiably worldwide now! 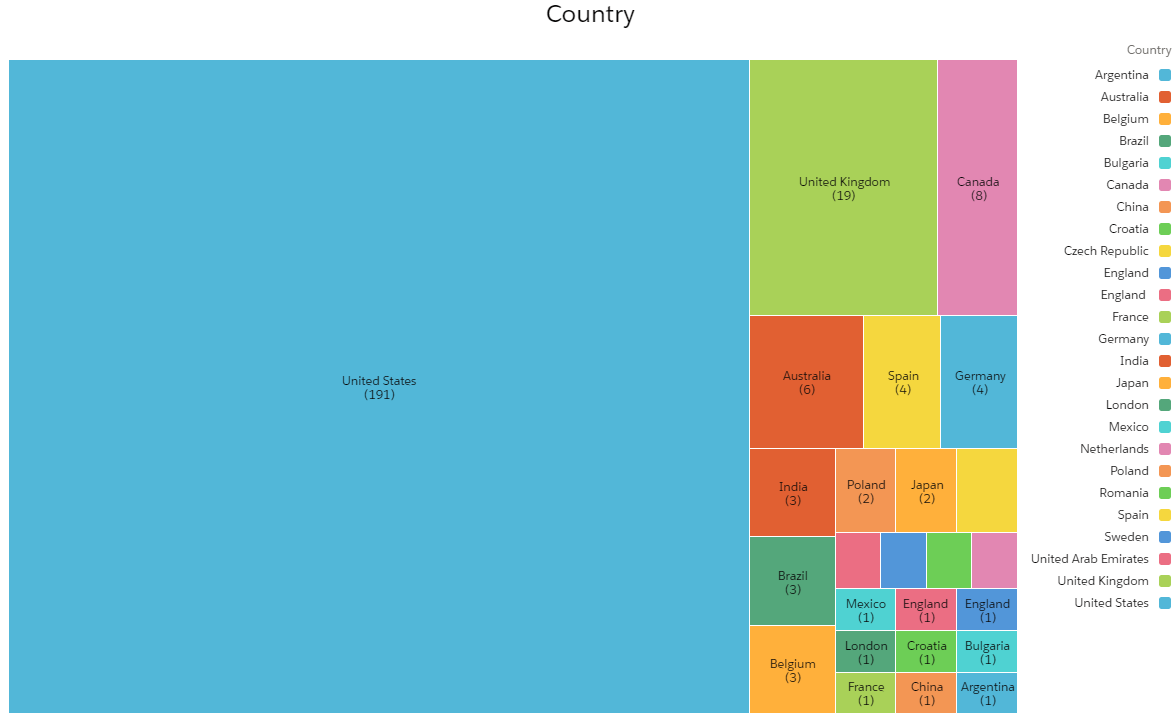 I'm surprised about how many Architects and Management members we have now. 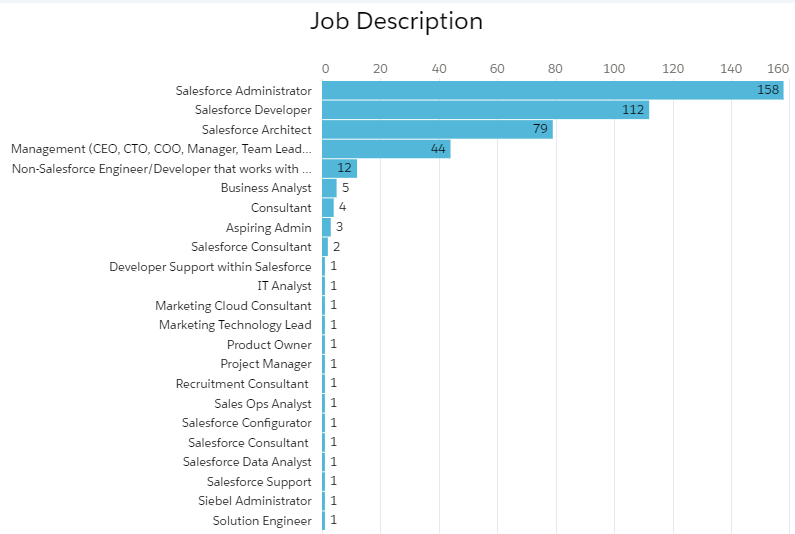 We're getting better at our jobs (hopefully)! Members with 6+ years of experience is up from 19% to 25%. On the other side a lot of under 1 year experience users, I know our community can get crazy sometimes but make sure to help those new people out! We were all there at one point and I'm sure most of us that have 4-5+ years of experience WISHES SFXD existed back then. 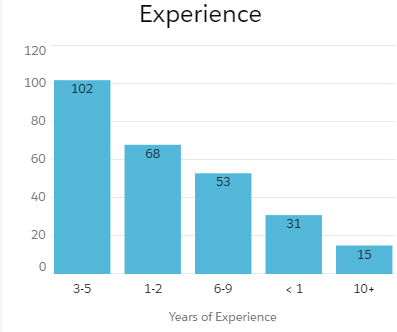 As expected Sales Cloud specialization steals the show with Service Cloud in second but Community, CPQ,  Non-Profit, and Einstein specialties are expanding! Self-Doubt seems to have replaced the just straight crying from last year. My Einstein Analytics chart is broken and I don't want to fix it so have Google's ugly bar chart. 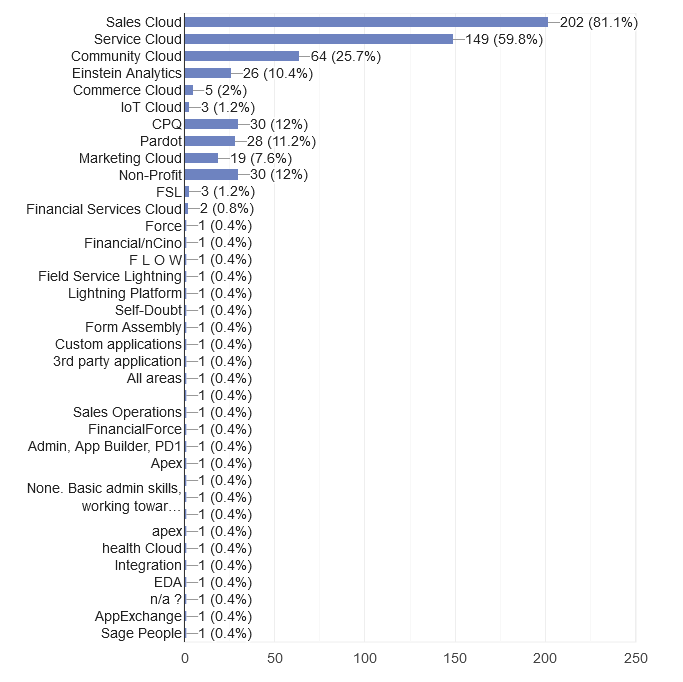 A slight swing toward Consulting instead of In-House. Also, our first new question! Remote vs In Office work: I'm actually kind of surprised that more than 25% of responders work strictly from home. That said, nearly half either are full time remote or have the potential to work from home, I feel like this trend is growing. We'll see next survey.

We were trying to get more exposure from other sources but it looks like Reddit is still king. 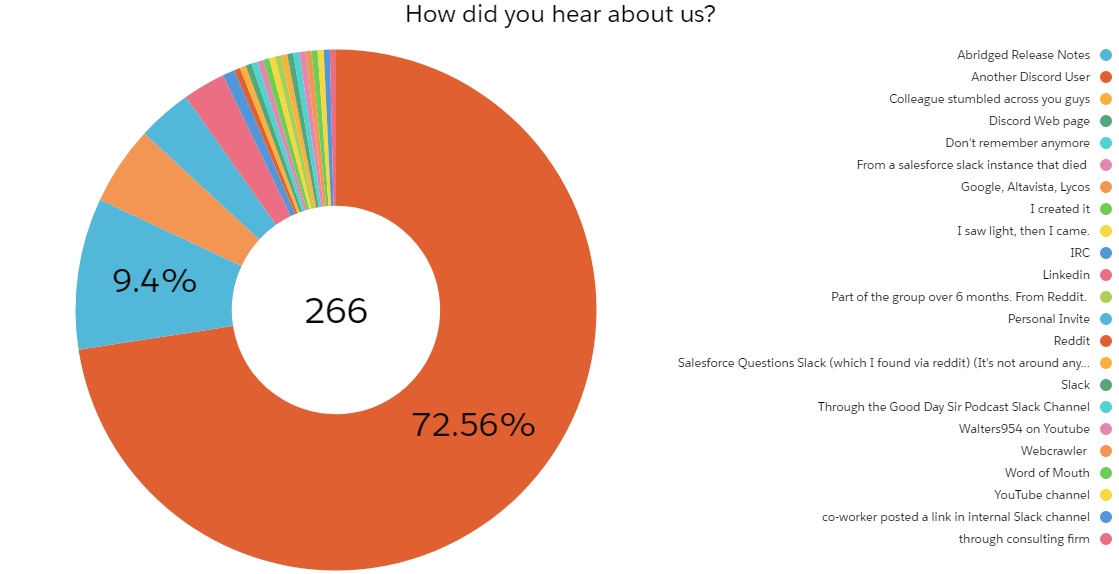 You can clearly see that 2019 was a huge year for us. That little spike in May? Permaggedon may have had something to do with that. The spike in November? Another Salesforce outage, this time Communities. Seems like Salesforce's failures are great for us!

Honestly no surprise here, happy to see #dev-general show up so big since it was new this year.

I get it, not everyone can live here like that 10.82% but that, "Only when there is an outage" number is WAY TOO HIGH. You're missing out on some Grade A Prime learning. 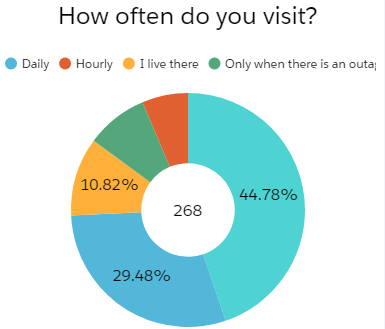 So top 3 members of the year are the creator himself Mr. Windyo followed by the king of salt, tsalb. Ruusu and I (SuperGrape) round out the top 3. A big <3 for that, it shows the Mod team is doing something right!

I felt like the Mods patting ourselves on the back for being members of the year is a little eh. Here are the actual MEMBERS of the year! A tie for first place, Solo Admin has shown up in a huge way helping #general constantly and vipasana kills it in the dev channels even though he doesn't work with Salesforce anymore! JustinAlpha takes 2nd also constantly helping out #general as well as meme'ing up the place. Four way tie for 3rd with BobboB (he basically runs #marketing-cloud if you don't recognize the name), Fibertigbit, Renato, and Spicy Waffle Berserker. ᵀᶦᵐᶦˀ ᴿᵉᵃˡˡʸˀ

I'm getting a little long winded here, lets knock some stuff out. All I'll say is lets pump those "Yes" numbers up! 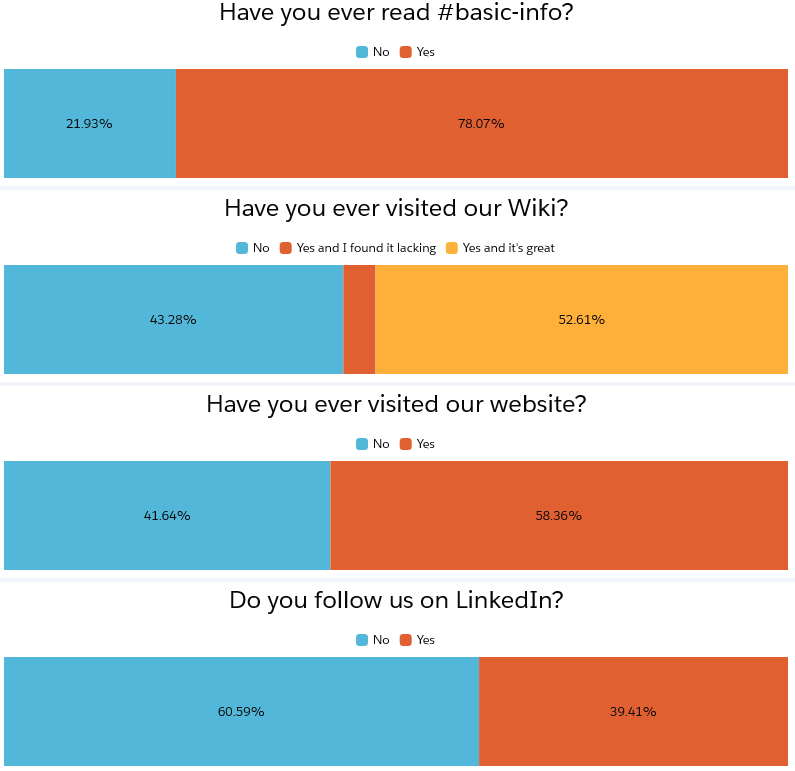 We try hard to not bother people with too many notifications, sorry to those 11 people that think it's too much! 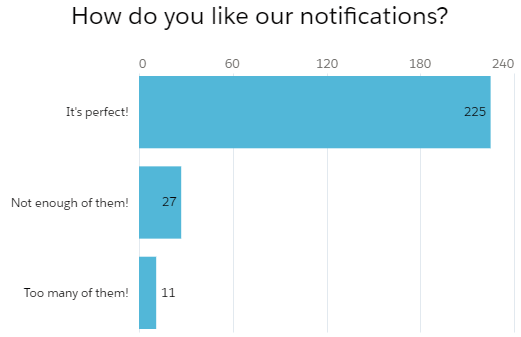 Not worth posting a chart for but we received some good suggestions for changing up some channels. This was also the most discussed topic in the "Any suggestions on how we can improve?" section. We will discuss internally about it. Someone asked for a #catmeme channel though, that is a hard maybe.

I like these ones because they make Windyo and maybe the rest of the mod team shed a tear of pride.

The actual percentage of Yes/Maybe answers is down 10% from last year but I'll blame that on the 10% of people who only come here for outages. Grab a role, stay a while, I'm sure we'll corrupt you. 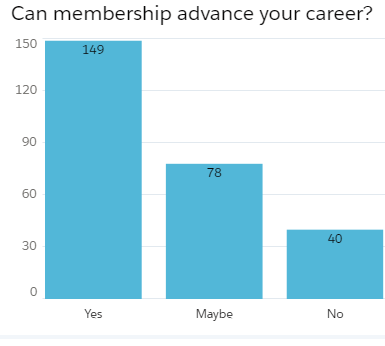 It's interesting that the server grew 3x and this answer only had a .3% change from last year, for the better too! 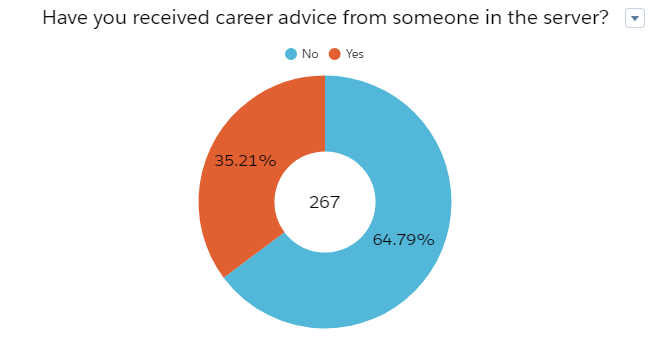 Another almost exactly the same results as last year. I think it's cool that these results are scaling so well with the size of the Community. Same as last year, we take credit for anyone who said yes on this question. 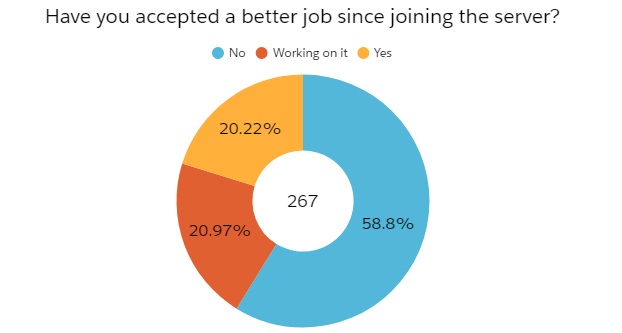 Considering this meme ended up on multiple blogs and even had stickers created out of it, it was no question that this would win. I believe JustinAlpha created this, nice. 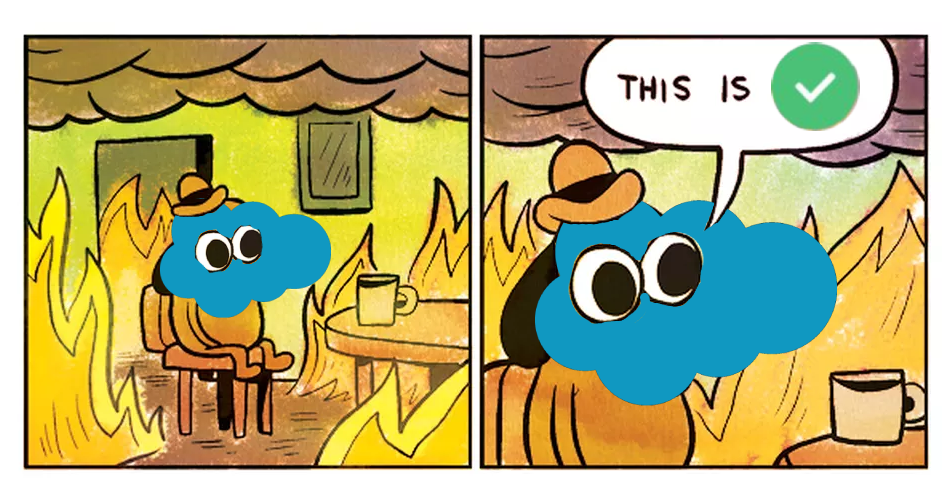 "Permaggedon" can probably be attributed to that meme as well a bunch more you can see here: https://wiki.sfxd.org/books/great-moments-in-sfxd-history/page/permaggedon---17052019tutc2 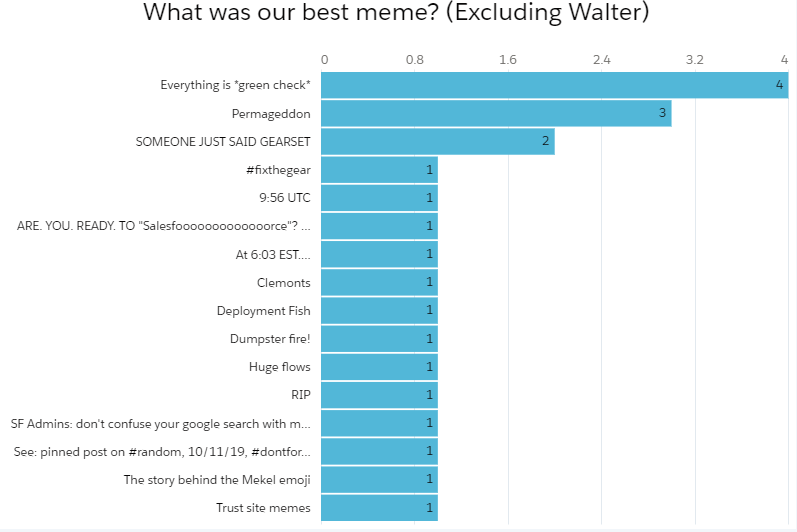 With a 5% growth in people READY TO SALESFORCE! I think we're improving, keep working on that last 8.6%, we'll get there.

There was only one response out of 272 that was obviously a troll. Considering we're wrangling 1,900+ members I think we can be proud of how professional our somewhat-kinda-sorta-semi-professional memetastic community can be.

We'd like to thank everyone that took the time to take the survey!